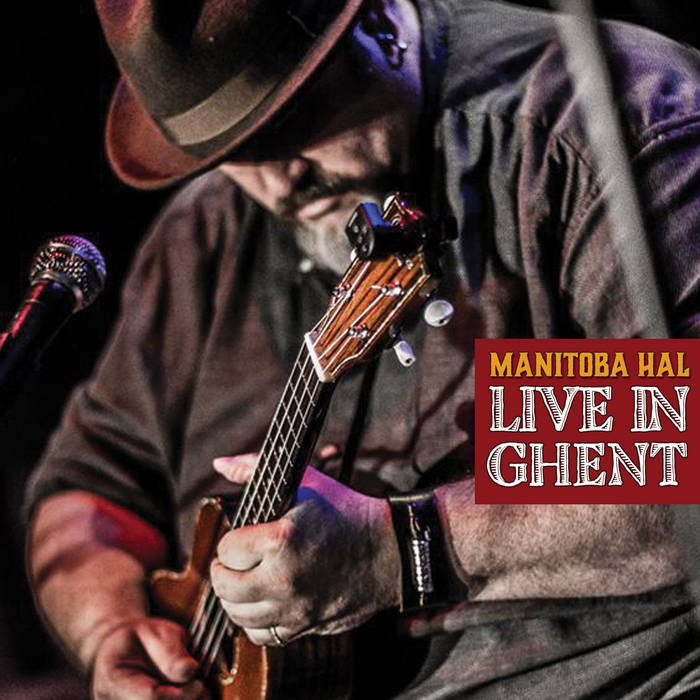 The two-disc set Live In Ghent was recorded in April 2016 at Missy Sippy Blues & Roots Club while on a tour stop in Belgium. The result is a fascinating combination of masterful musicianship, enthusiastic audience and a night to remember.

"Yep, this is what college coffeehouses were all about in the late 60s. Hal is a growler, playing and singing the blues solo with his ukulele. The proper mix for passing the hat as you passed a joint. A charming pro that holds his own against time and tide in fine style, it's easy to say this is as good as white boy blues gets (and with few exceptions, that's pretty accurate). If you aren't too cool for school or too hip for the room, you'll dig this as much as his fans in Belgium did when this live two cd recording was made. Check it out."
MidwestRecord.com Jan 12, 2017

"(4 stars) Manitoba Hal Brolund brings a sturdy voice and a whole lot of ukulele dazzle to a song list stacked to the rafters with blues and folk staples on this double-disc “live” set from Belgium. The Winnipeg-bred uke whiz keeps his travel costs light, backing his sure-fingered solo stretches himself courtesy of a loop or two. This congenial coffeehouse-set-on-steroids features fresh feeling takes on Mississippi John Hurt’s “Let The Mermaids Flirt With Me”, the Robert Johnson gem “They’re Red Hot” and the theme from the tv show The Wire, “Way Down In The Hole” and plenty of others."
Duane Verh Roots Music Report Jan 14, 2017

For over 15 years, Canadian blues artist Manitoba Hal has been forging a career as one of Canada’s most preeminent roots and blues multi-instrumentalists.

His original songs have become modern classics and his take on standards and popular blues songs of the past have brought him to the forefront of the Canadian and international blues scene. ... more

Bandcamp Daily  your guide to the world of Bandcamp

Featuring appearances from Kari Faux, Bluestaeb and and interview with NY-bred artist Wiki